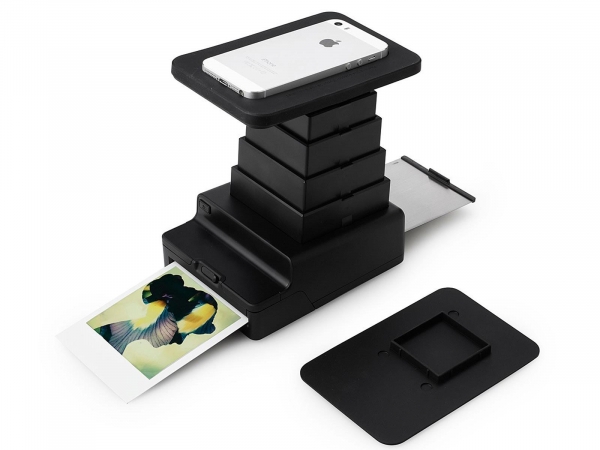 The Instant Lab Universal works completely differently to a digital printer. It is an analog photographic tool, but needs to be operated with a smartphone and the Impossible Project App.

When the smartphone or the tablet is placed on the cradle, the digital image is exposed through the four element, high-quality, coated glass lens and projected onto the instant film that is inserted in the Instant Lab. The App will control the exposure time and the brightness of the screen.

During the exposure, the shutter located at the back of the Instant Lab needs to be opened to allow the light to be projected on the film. The image reaches the transparent film cover sheet, creating a latent image on the silver halide emulsion in the negative.

Once the shutter is closed, the image can be ejected from the Instant Lab. On its way towards exiting the Instant Lab, it passes between rollers, rupturing the pod within the border of the film. The pod contains reagent that is squeezed from it and evenly spread between the negative and transparent cover sheet.

After a few minutes, the image is no longer trapped behind a screen. The resulting analog instant image is fully developed and can then be shared or displayed! Of course, you can also share your results on the Impossible's online gallery and other social media channels.