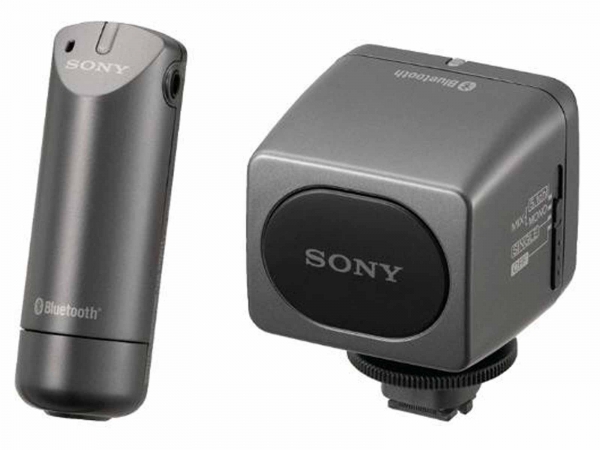 The ECM-HW2 from Sony is a complete battery-powered bluetooth wireless microphone system. It mounts into the active interface shoe of a Sony Handicam camera, and enables you to capture the subject's and the camera operator's voices from up to 300 feet (91.44 m) away. If your camera does not feature an active interface shoe, the ECM-HW2 will not operate. However, if your camera has a standard 3.5 mm microphone input jack, you can use the Sony ECM-AW3 for this purpose.

This mic system allows a subject and a device operator to communicate, while only picking up the voice of the subject and not that of the operator on the receiver end. This is useful in situations where you want to focus the attention on one subject. For example, when shooting a business presentation, the camera operator can whisper cues to the on-screen talent without being heard.

The ECM-HW2 also doubles as a two way communication system. It includes two sets of earphones that plug into each module, so both parties can clearly hear one another. A belt clip and an arm band are included (the arm band enables you to attach the transmitter to a subject that is wearing clothing that cannot accommodate a belt clip). An included carrying pouch will help to protect the transmitter.

Compatible with almost every camcorder with an active interface shoe

Even when far away (up to 300 feet / 91.44 m) from the camcorder, you can shoot while recording whole conversations with each other

Select to pick-up only the voice of the subject, or both the subject's and the camera operator's voices