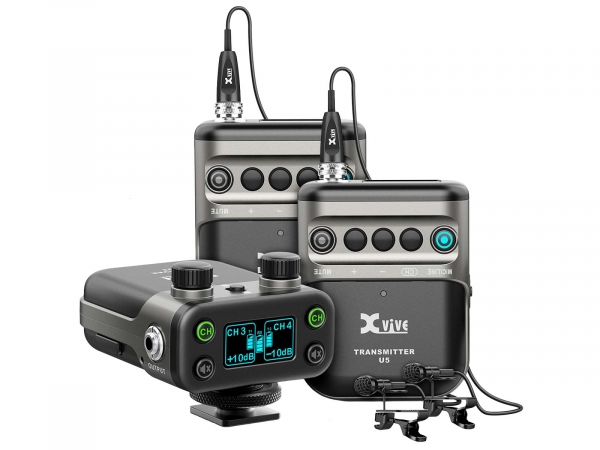 If you make videos with people talking on camera, you know that one of the keys to high-quality content is great-sounding voice recording. The U5 Wireless Audio For Video System offers a high-fidelity, easy-to-use, versatile and affordable solution! U5 comes with a beltpack transmitter; a DSLR-mountable, dual-channel, true diversity receiver; and Xvive’s own LV1 Lavalier Microphone—everything you need for the world to hear you loud-and-clear on video!

If you shoot videos with two speaking subjects on-camera, the U5T2 package doubles up on the transmitters and microphones. The U5’s wireless technology also allows you to broadcast your 2.4 GHz signal to more than one receiver, meaning you can send to two video cameras, or one camera and one mixer or audio recorder. The flexible U5 products are also available à la carte, so you can expand your system with a U5T Transmitter, U5R Receiver, LV1 Lavalier Microphone, LV2 Lavalier Microphone, or U5C Battery Charger with three U5B Batteries.

Just about any video shoot scenario benefits from wireless audio, and the U5 system’s generous 100-foot wireless range gives your speaking subject total freedom—for vlogs, livestreams, interviews, webinars, tutorials and more! The U5 Receiver is “true diversity”, which means that each of its two channels has two antennas, providing outstanding signal stability.

The LV1 Lavalier Microphone (included with the U5 and U5T2 sets)—and its more compact cousin the LV2—capture speech clearly on high-resolution 24-bit / 48 kHz digital audio, with no audible hiss, hum or background noise. The frequency response is very even and accurate throughout the range of human speaking, but the U5 Transmitter cuts the sound below 100 Hz to ensure that your mic signal is rumble-free. The latency between the transmitter and receiver is an unnoticeable 6 milliseconds.

Instead of sending a lavalier microphone signal wirelessly, you can also connect the U5 Transmitter to another mono audio source such as a mixer or audio player, using the 3.5 mm (1/8”) line in. Similarly, instead of connecting to a DSLR or video camera, the receiver can send its signal to an audio device such as a mixer or recorder.